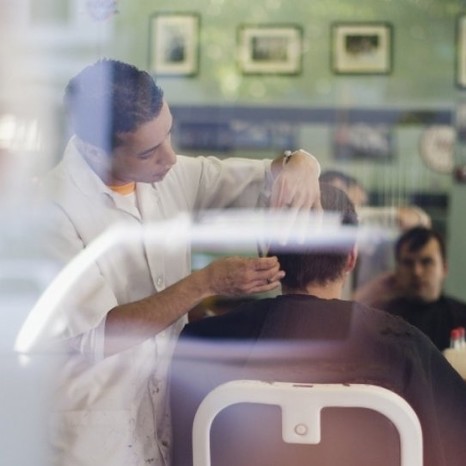 Sam Chulpayev, 35, began cutting hair 18-years ago as an unpaid trainee. Eventually, he got his own chair in a large NYC barber shop, building a clientele and formulating a plan. After six years of what he describes as "planning, saving, and dreaming," Chulpayev opened Made Man Barbershop in the New York City neighborhood of Chelsea on April 21, 2013.

Chulpayev was doing alright, but the 4-chairs in a 550 square foot shop weren't enough to accommodate the growing number of people who kept showing up for a cut and a shave. He added a fifth chair, but he was still turning away a growing number of potential customers everyday. It was then, one of his regulars said, "Sam, why don't you keep count of the number of people you turn away, and then you can do the math on the revenue to see if it's enough to expand."

To Chulpayev's surprise, he was unable to accommodate 50 people a day. This tiny barbershop was no longer just a place for guys in the neighborhood, they were attracting people from outside of the city. So 18-months later, when a 1000-sqare-foot space, which could hold 8 chairs, became available directly across 23rd street, Chulpayev wasn't ready, but he knew the opportunity was too good to pass up. He wondered if he'd ever get to see his family again if he took this on.

"We looked at the neighborhood of creative professionals, and we hoped people here appreciate something unique. It's a bit nostalgic, and they recognize it," says Chulpayev, adding, "We didn't want to look cheesy. I could have put in Formica countertop stations, but that wouldn't work. Everything had to be coherent and go hand in hand."

"It always felt wrong for me to have clients turned away because of our price, and we wanted to create a place where people could afford to get great service in an awesome atmosphere. We did not want to be an over priced shop without great service," says Chulpayev.

How does Chulpayev keep his bench strong?

"A lot of it is finding the right people. We pay really well, and now people seek me out. I turn away 95 percent. Then I train or retrain. Once you get a good employee, he will bring good people. One guy brought in 4 other good barbers," he says.

1. Character--"A non-combative easy-going personality is important. You can't work with people who won't adjust or let you teach them anything, and if it's difficult with me, it'll be difficult with the customers. They need to co-exist and respect others. If a guy is great, but the character doesn't work, it's not a fit."

2. Skill--"The hiring process starts with a call, and I evaluate immediately. If they negotiate in a bad way, I don't move forward. If I decide to bring them in for an interview, they cut my hair, and the fact that it's me shouldn't matter to them. They need to be confident in their skills. If they have a great personality, but they need work, I'll point out the weaknesses and if they want to learn, we continue, and I'll teach them."

3. Customer focus--"It's about the brand, the customer experience, and we like to keep a certain atmosphere. The way they approach a client, they can't just scream out, 'Who's next?'. I like to see a smile, ease. Customer service is not something that most people know. It's not about their personal life or problems, this is the client's resting time. I have my staff read the paper. We have a bar, and we put in an espresso machine for our morning clientele. The spend is insignificant. If you weigh the $1.50 we pay for that vs. the pleasure the client gets, it's a no-brainer, that's why we don't charge for that. We strive for a relaxing environment."

Back to articles
!-- Clickcease.com tracking-->